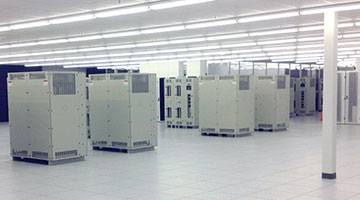 It takes a lot of energy to operate a building full of servers and information technology equipment 24 hours a day, seven days a week. At OneNeck IT Solutions in Eden Prairie, Minnesota, facility engineers are constantly thinking of ways to save energy and boost the company’s bottom line.

Nate Josephs, manager of Data Center Facilities in Minnesota for OneNeck, knew he could cut costs by using less energy within their massive data center operations. He recruited Xcel Energy to help him measure energy use and target ways to save through the Data Center Efficiency Program.

“The more efficient you get, the less you tax the equipment and the longer it lasts. Our operating expenses are reduced each time we lower the Power Utilization Effectiveness.” Hank Koch, Vice President of Data Centers Facilities

An energy efficiency study conducted by Xcel Energy helped Josephs and his staff create a priority list. Installing variable frequency drives (VFDs) on free cooling computer room air conditioners (CRACs) combined with VFDs on their evaporative fluid coolers was a great first step. They also chose to use evaporative fluid coolers instead of dry coolers which resulted in significant energy savings. It allowed for more efficient cooling year round and more hours of free cooling.

“The VFDs enabled us to turn the fans speeds up or down as opposed to turning the fans off entirely,” says Josephs. They have since added two more evaporative fluid coolers with the same characteristics.

“Adjusting the fan speed to manage the data center air flow on 25 CRAC units will save more energy than turning half the units off and operating the remaining units at 100 percent fan speed,” says Tim Guck, Xcel Energy account manager.

Guck points out that operating all VFD controlled CRACs in the free cooling mode takes advantage of Minnesota’s free outdoor cooling during the winter months. “You can turn the CRACs on but slow the motors down, allowing only the amount of air you need to cool the space. It saves fan energy and compressor energy,” says Guck.

Guck says once OneNeck started on efficiency work, it was that much easier to keep crossing items off their priority list.

“They got us involved early in the process which was smart because it enables us to help them save more energy,” says Guck. “Even if a customer isn’t sure if the project is going to happen, asking us for help early lets us figure out ways to maximize available rebates.”

Josephs and his team also worked on containing hot air generated by the servers to keep it from mixing with previously cooled air.

“We use vertical exhaust ducts which act as chimneys,” says Hank Koch, Vice President of Data Centers Facilities for OneNeck. “The chimneys separate the cold air supplied to the IT equipment from the hot air leaving the IT equipment, allowing us to move less air to cool the IT equipment.”

In all, Josephs, Koch and their team have completed the following energy efficiency projects:

With those changes, OneNeck now saves 1,555,745 kilowatt-hours of energy a year. According to the Environmental Protection Agency’s Greenhouse Gas Equivalencies calculator, that’s enough energy to power about 100 homes.

“The engineers completed a walk-through audit and made sure all of the facts were collected and energy information for the rebates submitted properly,” says Josephs.

“In the IT world, data centers are measured by the Power Utilization Effectiveness or PUE,” explains Guck. “All of these projects helped OneNeck improve their PUE and improve their equipment reliability at the same time.”

OneNeck has plans to continue the efficiency work. Projects on the horizon include:

“The more efficient you get, the less you tax the equipment and the longer it lasts,” explains Koch. “Our operating expenses are reduced each time we lower the PUE.”

Lower costs, improved reliability and a more efficient operation are exactly what the team wanted and will continue to target with each new project.